The Royal Palace
GENERAL INFORMATIONS
The Royal Palace of Caserta and Versailles are linked by a thin thread. The great French royal residence had been completed almost 70 years ago when Charles of Bourbon, king of Naples, decided to build his new palace. It was 1751 and the sovereign who would later become Charles III of Spain thought of the Caserta plains, located 20 km from the capital (just like Versailles from Paris), as the most suitable place: Naples, in fact, would have been difficult to defend from the sea. Furthermore, like its French forerunner, the Neapolitan palace would have been clearly Baroque. The Royal Palace of Caserta of the Baroque was in fact the last great work in Italy.
Royal Palace of Caserta, architect
After the refusal for health reasons of Nicola Salvi, architect of the Trevi fountain in Rome, the task was entrusted to the imaginative Neapolitan architect of Dutch origins Luigi Vanvitelli, who was working on the restoration of the Basilica of Loreto. It was he who designed the grandiose and daring project of the palace which immediately won the favors of King Charles. Died in 1773, Vanvitelli will not be able to see his work completed, whose works will be completed by his son Carlo.
Reggio di Caserta, construction
The first construction work on the royal palace started on January 20, 1752, the king's birthday. They would have ended several decades later (and without the construction of the dome and the perimeter towers), after a total cost of almost 8,800,000 ducats: today they would be more than 300 billion euros. For the heavier jobs, North African labor was used, the so-called barbareschi.
The Royal Palace of Caserta has a total area of ​​47,000 square meters, which makes it by far the largest royal residence on the planet.
Royal Palace of Caserta, rooms.
There are over 1200 rooms that make up the Royal Palace of Caserta. At night the show is ensured by the lights that filter through the windows, 1742 in total and all arranged in a rigorous order.
Reggio di Caserta, interiors
The interiors are a hymn to luxury and pomp, but also to elegance. The main artists of the kingdom took care of the furnishings and frescoes. One of the most beautiful interiors of the Royal Palace of Caserta, the Palatine Chapel, was created and decorated personally by Vanvitelli. The Court Theater is also splendid, an authentic jewel of 18th century architecture.
PHOTO GALLERY 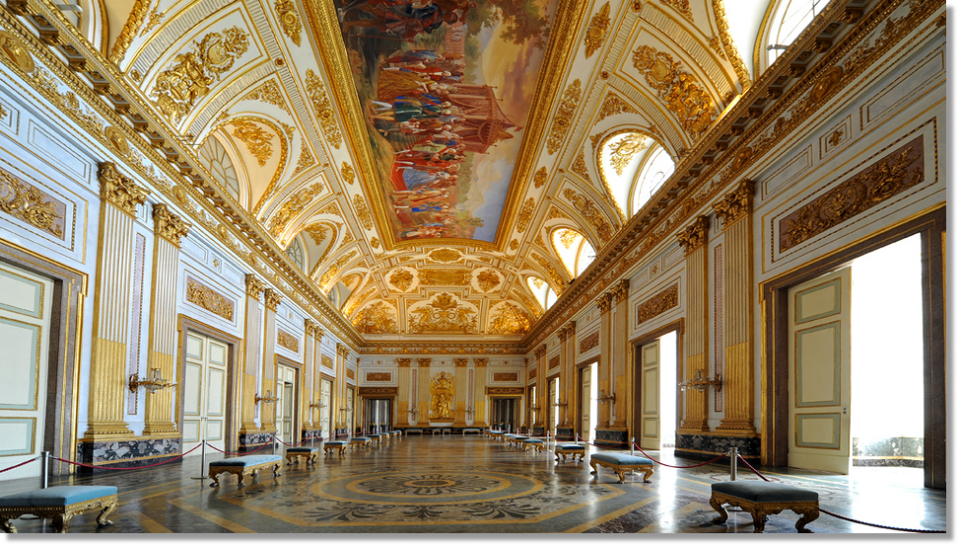 CURIOSITY
One of the best-known anecdotes related to the Royal Palace of Caserta is that relating to the cataloging of objects by Piedmont officials after the annexation of the Kingdom of the Two Sicilies, which took place in 1861. In front of an object never seen (and used) before, a Savoy officer noted: "Strange unknown object in the shape of a guitar." It was the bidet.

THE PARK OF THE REAL PALACE OF CASERTA
GENERAL INFORMATION

The Park of the Royal Palace of Caserta is not the one designed by the architect Luigi Vanvitelli;
the economic conditions of the kingdom at the time of the completion of the works imposed simplifications which ultimately resulted in a more lively relief of the main motif of the composition, that is, the waterfall and the basins lie in front of it.
The concept of the garden, made up of avenues stretching as far as the eye can see with a background of distant countryside, grasslands surrounded by groves with mirrors of water, was replaced by that of the park which became one of the most significant expressions of Baroque art.
The park of Caserta is the latest example of these grandiose spatial concepts, created between the seventeenth and eighteenth centuries, when the concept of royalty was manifested in the most solemn external forms.
Vanvitelli was certainly influenced by the construction of parks made throughout Europe, including Versailles; however, more than the memory of European examples, the study of the terrain and the clear vision of the possibilities offered by a landscape open towards the sea at noon, closed to the north by a semicircle of hills and rich in luxuriant vegetation prevailed.
The park of the Royal Palace of Caserta therefore extends behind the palace, reduced to a simple strip of land, which in successive ramps leads to the foot of the waterfall where the Briano hill rises where the thick vegetation seems to continue the work of Vanvitelli.
The initial project included a parterre divided into flower beds, with large ornamental designs with scrolls, shells, intertwined ribbons, as well as large basins, fountains and balustrades that would add the grace and splendor typical of the eighteenth century.
All this was replaced by a simple lawn which in any case fully restores the majesty of the building.
All the avenues open in the woods lead to the Castelluccia, a place of recreation for the young King.
PHOTO GALLERY 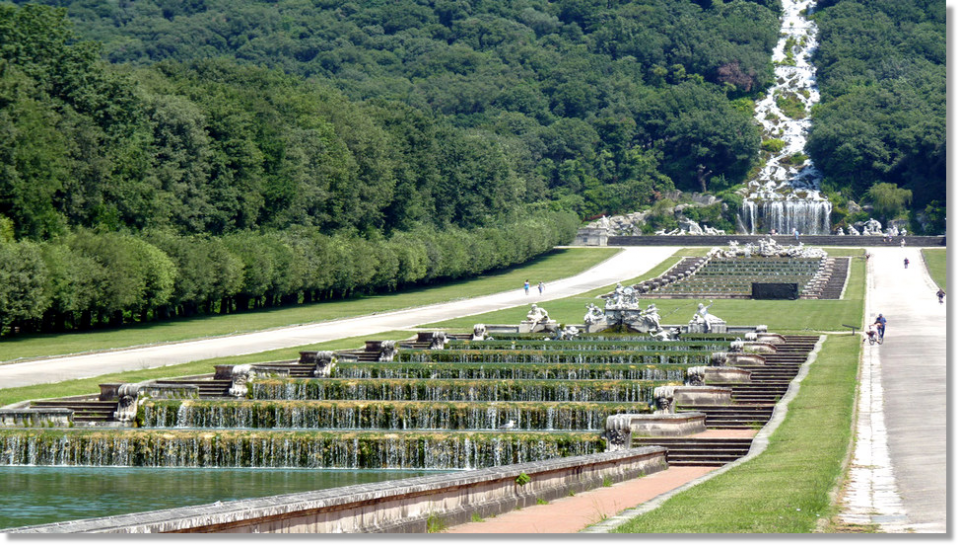 CURIOSITY
There is one thing that makes the park of the Royal Palace of Caserta something unique in the world: "the water route". It is a vast and complex system of basins, fountains and underground channels, all created to recreate a scenographic effect of absolute prestige. The water of this street comes from the majestic Carolino aqueduct, which feeds about 3 km of real works of art day and night.
The aqueduct is 40 kilometers long, to bring water to the park it crosses five mountains and three rivers!

THE ENGLISH GARDEN
GENERAL INFORMATION
A landscape garden for the Royal Palace of Caserta
At the end of the central avenue, also known as via dell’acqua, you come across the Fountain of Diana and Atteone. On the right, leaving the palace behind, the English Garden is hidden. A small park within the park, protected by an elegant gate and a long wall that delimits the perimeter. Inside, several streets are lost among plants and flowers from all over the world, projecting the visitor on a journey of colors and scents. But who is the author of all this?
The English Garden was designed by Carlo Vanvitelli, son of the architect of the Palace, and the British gardener John Andrew Graefer. Both acted on the will of Queen Maria Carolina, eager to create something that exceeded the beauty of the Petit Trianon, the park of the Palace of Versailles and a source of pride for her sister Marie Antoinette. Hence the creation of a garden in which landscape was the key word. The works began in 1785 and in a few years ponds, streams, hills and lakes were built, covering a total area of ​​about 24 hectares. All powered by the Carolino Aqueduct, which guaranteed a constant supply of pure and fresh water. In addition to natural beauty, following the English fashion that was spreading throughout Europe, the garden was enriched with various architectural elements: small corners to rest during the tour and greenhouses for the study and conservation of some very rare plants.
Among plants, flowers and ruins: a journey through the English Garden
Between the end of the eighteenth century and the beginning of the nineteenth century, the current of Neoclassicism influenced most of the artists throughout Europe. A clear example of this is the Royal Palace of Caserta, built in full Baroque and neoclassical style. Even the English Garden suffered the charm of the glories of the past, thanks above all to the influence of the excavations of Pompeii and Herculaneum that began a few decades earlier and financed by the Borboni. Some of those finds were placed inside the garden itself, such as the beautiful section of the Cryptoporticus. It is a circular nymphaeum in which it is possible to admire various works recovered from Roman excavations. A small pond occupies the central part, where the statue of Venus made by Tommaso Solari lies on a rock.
Not far away it is possible to get lost in the Grove of the labyrinth. Plants and flowers of all kinds surround a suggestive water lily pond. Inside, two small islands stand out: one characterized by a small pavilion that offers shelter to the ducks, the other with the remains of an ancient Roman temple to make their way through the vegetation.
Botanical specimens from all over the world
The many avenues are lost in the greenery of the English Garden, leading the visitor to discover the wonders of Mother Nature. Around the corner you can find yourself in a small bamboo forest. Not far away, other Asian species color the landscape, such as the first Camelia Japonica plant that arrived in Europe at the behest of the queen herself.
To cure all this, Graefer had a greenhouse and a building built within the complex. In this two-story structure, the British could monitor the state of the plants and study them. Precisely during his stay at the Bourbon court, Graefer created part of his descriptive catalog of over one thousand hundred species and varieties of herbaceous and perennial plants.
In the 19th century Giovanni Gussone and Achille Terracciano, two illustrious botanists of the period, took care of the English Garden, renaming it the Royal Botanical Garden of Caserta. Here the studies and observation of the thousands of botanical species present continued, avoiding the risk of abandonment after the unification of Italy.
Today this little paradise is considered one of the most prestigious sections of the whole Royal Palace of Caserta. Thousands of visitors come here every year, admiring centuries-old trees, brightly colored flowers and one-of-a-kind works of art. A show not to be missed, especially with the start of the summer.
PHOTO GALLERY 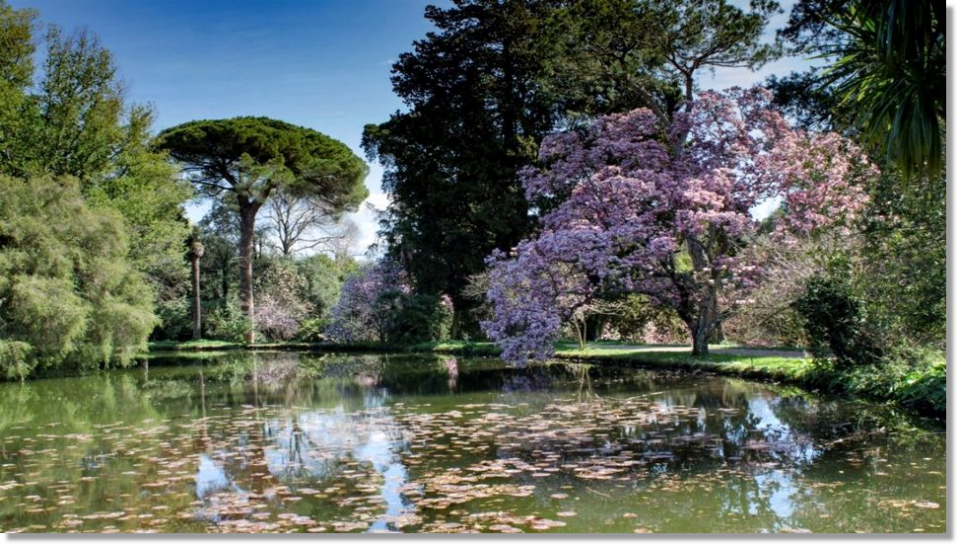 CURIOSITY
The Cryptoporticus
The Cryptoporticus is located inside the English Garden of the Royal Palace of Caserta.
The Cryptoporticus is a nymphaeum, located in the Bath of Venus, consisting of fake ruins of a Doric temple, deliberately without a roof, not only to give the impression of being in front of a ruin of the Roman period, but also to allow the penetration of light and vegetation. It contains cracked and disconnected columns, walls and floors, niches with Roman statues and frescoes from the archaeological excavations of Pompeii and Herculaneum and from the Farnese collection.
An oasis of peace to see and enjoy!